Aims of the Working Group 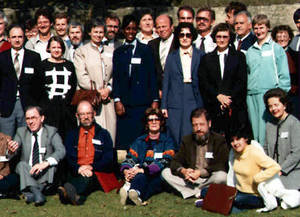 Some of the participants at the Doncaster Meeting, where the WG was created.

The wide possibilities foreseen from the application of petrographic techniques to the study of chars encouraged the formation of a new Working Group within Commission III (industrial applications) of the ICCP, at the Doncaster meeting in1986 (see photo). Margaretha Bengtsson was elected as the convenor of this new working group. The objectives of this Working Group are:

Activities of the Working Group 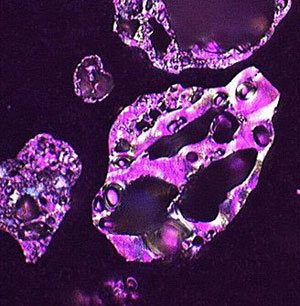 The activities of the Working Group since its creation were aimed at the onset of a unified criterion among members for the classification of char particles. To achieve this, Round Robin exercises were performed where participants were asked to analyse polished blocks of char samples, identifying char particles selected on a point-counting basis, and classifying them according to a proposed classification scheme. The results obtained from each exercise were discussed in the next meeting, from which a refined classification scheme arose, to be then used in the next exercise. This work was mainly carried out under the convenorship of J.G.Bailey (from 1990, Wollongong Meeting, to 1996), who established the basis of the Char Classification System being currently used by the Working Group. This is (revised after the Bucharest meeting, 1999) as follows:

J.G.Bailey relinquished the convenorship after the Herleen meeting (1996) and the commitment was passed on to Edward Lester and Diego Alvarez, the current convenors of the Working Group.

The last exercises carried out consisted of

1997: A char collected after a short residence time in the boiler and a combustion residue from the same run had to be compared in this exercise. Furthermore, the combustion residue was concentrated by two different methods: sieving and discarding the < 75µm fraction, supposed to be mainly composed of inorganic constituents, and acid digestion of the inorganic fraction. The analysis of the three samples thus obtained revealed that the two methods used for the beneficiation of the flyash were equally valid, the former having the advantage of a saving of time and laboratory work. The data reported by participants showed fairly good repeatability’s, but the reproducibility was still very poor. As a consequence, no conclusive results were obtained from the comparison of the pyrolysis char and either of the combustion chars

1998: The use of an improved classification scheme led to much better reproducibility’s in the analysis of a medium rank, high inertinite coal char obtained at lab scale. 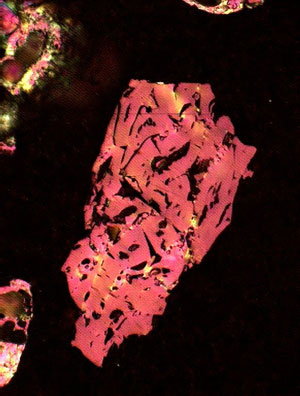 1999: The same sample as in the previous years exercise was analysed following a more comprehensive classification scheme. The reproducibility was not much better than in the 1998 exercise, but this can even be considered as a successful result, given the additional complexity of the scheme. This year, for the first time, a CD containing images of selected char particle cross-sections was also distributed to participants. The images consisted in some examples of each of the char structural types considered in the classification system, plus 140 images from char structures taken from seven coals of different ranks and maceral compositions, which participants had to classify according to their own criteria. The results showed that the reproducibility was exceptionally good, much better than ever seen before in a Round Robin exercise of this working group. This is a proof that the major source of disagreement comes from differences in the operating conditions of the microscopes (illumination, magnification, use of retarding plate, etc.) used by participants, rather than a lack of precision in the definition of the various char types or an inability of participants for estimating the morphological parameters required in the application of the classification system.

In the Bucharest meeting (1999), the working group decided to temporarily abandon the manual analyses and concentrate the effort in the generation of a large graphic database containing all those structures which had been classified as a given char type by at least 75% of the participants in a CD Round Robin Exercise.
Round Robin exercises on combustion char samples and CD-photos have been conducted.
The WG has had excellent participation with 18-20 people for each exercise.

Reports and materials available:Convener’s 2002 Presentation (in Power Point).E. Lester gave a recap of the char atlas and the results of previous analyses. The status of the char atlas was presented (2003, The Nederland, Utrecht).

The next exercise will be CD-based and it will focus on linking fly-ash chars to the parent coal.