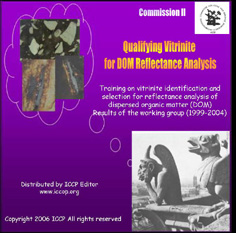 Front Page of the Training CD

The group was created in 1999 (Bucharest) to test and discuss a qualifying system for vitrinite particles in order to determine the quality of reflectance data.

A training kit containing 4 mounted blocks and a CD entitled Qualifying Vitrinite for DOM reflectance analysis is available from the ICCP Shop at a cost of 120 € (ICCP members = 40 €). The CD comprises the results of the WG over the years including more than 300 vitrinite images classified by participants and the spread of result sheets, allowing participants to test their proximity to the group mean. All the material needed to run the exercises is also available.

Files are available upon login
Tags: DOM Reflectance Analysis
Working Groups
Please check the information in your own working groups (take Peat Petrography as an example).