This working group was established in 1988 at the ICCP Meeting in Aachen. The aim was to look at the various thermal indices (i.e., vitrinite reflectance, fluorescence, thermal alteration index, Rock-Eval, volatile matter, elemental composition) in respect to their sensitivity at different rank levels, their limitations and the correlations and comparabilities amongst them.

The objectives of the working group moved between 1994 and 1998 to the standardization of fluorescence measurements and are now back to the original ones, incorporating other geochemical thermal indices such as isomerization ratios from biomarkers. Exercises from 2000-2010 looked at all of these approaches – comparison amongst different maturity parameters and standardization of fluorescence measurements on liptinites. 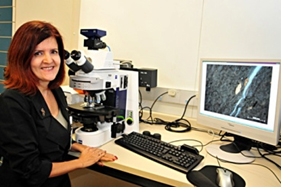 The samples analysed over the years, exercises performed, and publication of results are as follows:

Series of coal and oil shales taken at different depth

Click the heading above to view the presentation given in Victoria.

The results of the TIWG from the years 2007-2008 were presented in Oviedo. The exercises investigated a maturation series comprised by a set of three samples from the Neuquï¿½n Basin, Argentina. Vitrinite reflectance, spectral fluorescence of liptinite, and Rock-Eval analyses were performed. Results for Rock-Eval presented a good correlation, as well as the results for spectral fluorescence, in particular those of participants having recently calibrated their equipment with the ICCP lamp. Correlation of vitrinite reflectance results was very poor due to low vitrinite content of the samples. As it has been proven particularly difficult to find a natural maturation series, the convener proposed a new exercise based on an artificial maturation series produced by the hydrous pyrolysis procedure. As a starting sample the Posidonia shale was suggested.

Click the heading above to view the presentation given in Beijing.

Participants received three polished blocks and were asked to provide results for mean random vitrinite reflectance and spectral fluorescence measurements of telalginite. Each spectral measurement reported should represent a mean value of about ten single measurements. The mean spectral curve should be adjusted with the correction function obtained by the calibrated ICCP lamp source (exercise of year 1996/97). Seventeen participants provided results for mean random vitrinite reflectance, one participant for VIRF and fourteen for spectral fluorescence measurements. The results have been summarized in a report which is intended to be submitted to the International Journal of Coal Geology or another peer-reviewed journal. This round robin exercise was the last planned for the working group and the effort will be closed following publication of the report.

Files are available upon login
Tags: Application Studies
Working Groups
Please check the information in your own working groups (take Peat Petrography as an example).