The inertinite in combustion W.G. was established in 1995 at the Krakow Meeting as the natural evolution of the former Reactive Inertinite W.G., which mainly dealt with the behaviour of inertinite under the conditions prevailing in coke ovens. Once that W.G. accomplished the objectives pursued, it was decided to redirect it to the study of the transformations undergone by inertinite in conditions similar to those occurring in pulverised fuel (p.f.) boilers, taking advantage of the expertise acquired, but also bearing in mind that the conditions at which both processes operate strongly differ from each other, in heating rates, atmosphere, particle size, etc.

The combustion reactivity of inertinite has been the subject of a number of studies, most of which made use of the experience achieved from the coking industry. These studies coincide in that the plasticity of inertinite when submitted to p.f. conditions is enhanced compared to carbonisation, and that most of the inertinite undergoes changes which are identifiable with the aid of an optical microscope. Experience has also shown that the inertinite-rich coals may burn as efficiently as vitrinite-rich ones and therefore the concept of reactivity is not necessarily linked to that of fusibility. On the other hand, inertinite behaves in a variable way, due to its inherent heterogeneity, that is difficult to systematise, whereas the behaviour of vitrinite follows rather defined trends depending on the rank of the coal. Although the subject “reactivity of inertinite” may be well beyond the scope of an ICCP W.G., there are a number of points where petrology may make a contribution to the understanding of inertinite behaviour in the boilers, provided that we are able to establish the relevant features to be considered.

It is generally accepted that combustion proceeds through two main steps. The first one is the devolatilisation of the particle, which yields a solid residue commonly referred to as char, and the second one is the combustion of the char. As the second step is more time consuming than the first one, it might be considered that the combustion behaviour of the inertinite would depend on the structural rearrangements taking place during the first short pyrolysis stage. The chars will therefore provide an excellent starting point to describe the behaviour of inertinite during combustion. 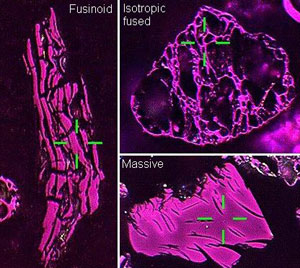 The objectives of this working group can be then summarised as:

In the Meeting held in Heerlen (1996), a rather simple classification scheme was established, in which the criteria to distinguish between classes consider both the optical texture (isotropic/anisotropic) and the porosity development. The system has 7 different classes that cover all the possible char occurrences.

The counting procedure for the microscopy analyses is similar to the one used for maceral analysis in coal. It considers the material under the crosswire which has a homogeneous optical appearance and not the whole particle.

The report of the results is available in the restricted area of the ICCP webpage upon login.

•          In 1998, A round robin petrographic analysis was performed on a char prepared from hand picked inertinite from a MRC (Rr=0.66 %), hvb coal (Coal and Char N in the Atlas and in the training exercises)

•          In 1999, petrographic analysis on two char pellets were performed: the sample from RR 1998 plus a char from a moderate inertinite (46%), MRB (Rr=1.28 %), mvb coal (Coal and Char L in the Atlas and in the training exercises).
A round robin exercise based on CD images with marked fields was performed

Two reports one dealing with the microscopy results and one with the classification of CD images are available in the restricted area of the ICCP webpage upon login.

•          In 2000, the CD round robin contained images taken with and without retarder plate in order to study the influence of observation conditions in the results. This year the activities of the working group ceased and it was merged with the combustion working group.

•          In 2006, it was decided to compile the information available and prepare a training Atlas. The compilation for the atlas revealed that a number of classes were under represented

A summary of the main results achieved by the WG over the years is available in the restricted area of the ICCP webpage upon login.

•          In 2007, an additional CD exercise was performed to complete the char material occurrences for the Atlas. The Atlas layout and CD content was discussed and accepted.

An atlas including the images classified over the years by the working group and the corresponding classification of the images is in the final status of preparation. An example of the information provided in the atlas can be downloaded upon clicking.

If you want to train in classifying the maceral origin and optical texture of chars you can download the following exercises in which the images classified in the WG are included. If you enter your results in the corresponding excel sheet you will get an evaluation of your degree of agreement with the group.

The WG was officially closed in 2001. In this year it was decided that the best way to proceed was to merge the activities and objectives with those of the Combustion WG. The group was re-activated in 2007 to prepare the training atlas and training exercises and it is now closed after having accomplished its objectives.