Liquefaction is the conversion of coal to liquids and can be carried out in terms of hydrogenation (direct liquefaction), pyrolysis and Fischer-Tropsch synthesis (indirect liquefaction). Thereby, pyrolysis takes a unique position since it is not only an independent method for upgrading solid fuels, but also the initial step of most conversion processes (e.g. combustion, gasification and even hydrogenation). 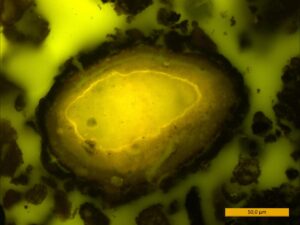 Since understanding the very complex pyrolysis behaviour of the different coal macerals enables the possibility of predicting the course and efficiency of the technological pyrolysis process, this knowledge is of prime importance. A first approach to this can be given by a systematic examination of the micropetrography of solid residues.

In other coal utilization processes, like combustion or gasification, such applied organic petrology is already far advanced and demonstrated its high potential. And even for the hydrogenation process a classification system was developed and published by the ICCP in 1993. But although both processes – pyrolysis as well as hydrogenation – are used to generate liquids from coal in the absence of air, this classification cannot be directly transferred to pyrolysis residues. The reason for that are the highly divergent process conditions between hydrogenation (reactive atmosphere at high pressure with a hydrogen donator) and pyrolysis (inert or reactive atmosphere without any additional reaction agent at relatively low pressures).

Because of that, the published classification systems for hydrogenation residues of the ICCP (1993) should be expanded with a view to classifying the residues of hydrogenation as well as pyrolysis by the same criteria and nomenclature. Thereby, a classification system could be established, which enables the direct comparison of two technological important but very different processes.

The Liquefaction Residues Classification Working Group is based on the research activity of the ICCP in the 1980s dealing with the micropetrography of hydrogenation residues. After finalizing a classification system for them in 1993, a continuation of the working group was proposed by Isabel Suárez-Ruiz on the ICCP-Meeting in Sosnowiec, Poland, in 2013. But this nomination was refused by the ICCP because of the assumed lack of relevance. During the meeting in Potsdam in 2015 the importance of the solid residue analysis and classification were shown again by a submitted poster about this topic. Therefore, the proposal was renewed by Isabel Suárez-Ruiz and Henny Gerschel, presented to the ICCP and accepted. 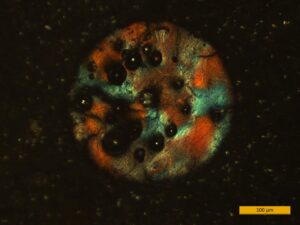 The general objective of the Liquefaction Residues Classification Working Group is to investigate the microscopic components of coal liquefaction residues and to and draw conclusions for technical process optimization.

For the microscopic investigations, more than 300 samples from soft brown coal conversion are already available. These samples originate from different research projects of the TU Bergakademie Freiberg (Germany). About 200 of them were prepared from one special brown coal sample from the main seam of the lignite open pit near Schöningen, Germany. The pyrolysis experiments were carried out in four different lab-scaled testing plants representing a broad spectrum of process conditions:

Due to the fact, that all experiments were conducted using the same raw coal, the solid residues are highly comparable and the influence of different process parameters on the pyrolysis can be outlined.

For comparing these pyrolysis residues to those of the hydrogenation process, about 100 further samples from direct liquefaction are also available. These were prepared from different brown coal lithotypes from seam 1 in the lignite open pit mine Schleenhain, Germany. For these three lithotypes (black, brown or yellow) the process temperature was varied from 300 to 450 °C. All these experiments were carried out in the same lab-scaled autoclave for a holding time of 30 min under a pressure of 101 bar and adding 2 % of a catalyst. Just for simulating the case of average, in some tests the H2-donator as well as the hydrogen in the atmosphere was omitted. Because of this, the experiments show the influence of the coal lithotype on the hydrogenation process.

Together, both experimental series provide the possibility to compare the behaviour of lignites in hydrogenation and pyrolysis by investigating their solid residues. To get deeper insights to the processing of high rank coals, additional samples would be necessary. Unfortunately, further experiments at the TU Bergakademie Freiberg (Germany) are no longer possible. 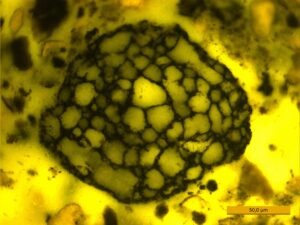 In 2016 already published classification systems for solid process residues, including that of the ICCP of 1993 were compiled and reviewed.

In 2017 a first draft to the classification of liquefaction residues was outlined. This draft includes a generally nomenclature of the microscopic components of solid liquefaction residues as well as a description of their optical appearance. Since these components serve also as indicators for the course and efficiency of the technological process, possible indications for process optimization are also derived.

Requests among WG members between 2017 and 2020, as well as outside of ICCP, for additional samples for a round robin excursion did not yield any new sample material.

The next step is to develop and establish petrographic criteria that will allow solid liquefaction residues to be identified and classified (determination scheme).

Based on this, a round-robin exercise is to be worked out using photomicrographs from the above-mentioned samples from the TU Bergakademie Freiberg (taken under reflected, polarized and fluorescence light). This serves to check and, if necessary, to improve the draft and the determination scheme.

Finally, an atlas including all analysed and classified residues should be developed. 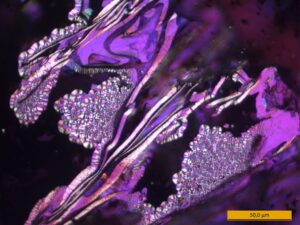