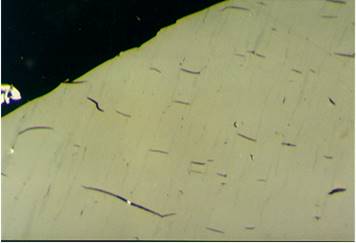 The Pseudovitrinite Working Group is concerned with investigating the precise nature and properties of the material referred to as pseudovitrinite, and with the need for its recognition in rank studies and coal utilization. The term pseudovitrinite was introduced by Benedict, Thompson, Shigo & Aikman (1968) to describe vitrinite-like material in Appalachian coals which displays higher than collotelinite (former telocollinite) reflectance, slitted structure, remnant cellular structure and an absence of pyrite inclusions. During the coking process pseudovitrinite was regarded as poorly reactive.

According to the ICCP System (1994), related terms for collotelinite include:

According to ICCP System 1994, the so-called pseudovitrinite is derived from similar plant material as collotelinite. Its reflectance is somewhat higher than that of telinite and collotelinite in the same coal. It may show some cell structure and typically has small slits (‘comma-slits’) and serrated fragment margins.

The reflectance of collotelinite (ICCP System 1994) is used widely as an index of the rank of coal, and also of organic matter in sediments. This implies that “so-called pseudovitrinite” (if present) should be included in routine vitrinite reflectance determinations. Work on the high-volatile coals in the Gunnedah Basin, Australia (Gurba and Ward, 1996, 1998, 1999) suggests for example that, if followed, this will result in abnormally high reflectance values in coals where the pseudovitrinite material is abundant.

However, it should be noted that Pseudovitrinite is not classified as a maceral in accordance to the nomenclature enclosed in the ICCP System 1994 and published by ICCP (1998). It is not enclosed in the ISO 7404-1:2016.

Objectives of the Pseudovitrinite Working Group 1996-2004

The objectives of the Pseudovitrinite Working Group, established in 1996 [with input from Marlies Teichmuller, Harold Smith, Neely Bostick, Alan Davis, Wolfgang Kalkreuth, and others] and reconfirmed at the ICCP’s Wellington meeting in 1997 are to:

A letter from L. Benedict, strongly supporting the working groups program for the study of pseudovitrinite was received in February 1997.

The original definition of pseudovitrinite by Benedict et al. (1968) set out the following criteria for its distinguishing from other vitrinites:

(b) Pseudovitrinite – An appraisal of the work carried-out by the International Committee for Coal and Organic Petrology (ICCP). Lila W. Gurba, A. Harold V. Smith, Barbara Kwiecinska and others.

Smith, A.H.V, 1980. An appraisal of the work carried out on pseudovitrinite by the ICCP and the direction of future work, unpublished.

Investigation of pseudovitrinite by ICCP was begun in 1966, but due to a certain amount of controversy and international disagreement about defining criteria, activity ceased around 1971. A historical account of the work carried out by the ICCP during this period was reported by A.H.V. Smith (1980) in a report entitled An appraisal of the work carried out on pseudovitrinite by the ICCP and the direction of future work. No further work was conducted on the material by ICCP, however, for 15 years after that time.

Interest in pseudovitrinite was rekindled in 1996 at the ICCP meeting in Heerlen, Holland

[https://www.iccop.org/documents/iccp-news-14.pdf/], following a report presented by Gurba and Ward (1996). A new Pseudovitrinite Working Group was formed at that meeting, with responsibility to investigate the nature and properties of the material and develop appropriate recognition criteria. A total of twenty two members were involved between 1996-2003 in the activities of the group.

Tags: Pseudovitrinite WG
Working Groups
Please check the information in your own working groups (take Peat Petrography as an example).